Hi all – you can now follow me at Words & Stitches for new stories, as well as book/movie reviews, free crochet patterns and more 🙂

Thanks for all your support! 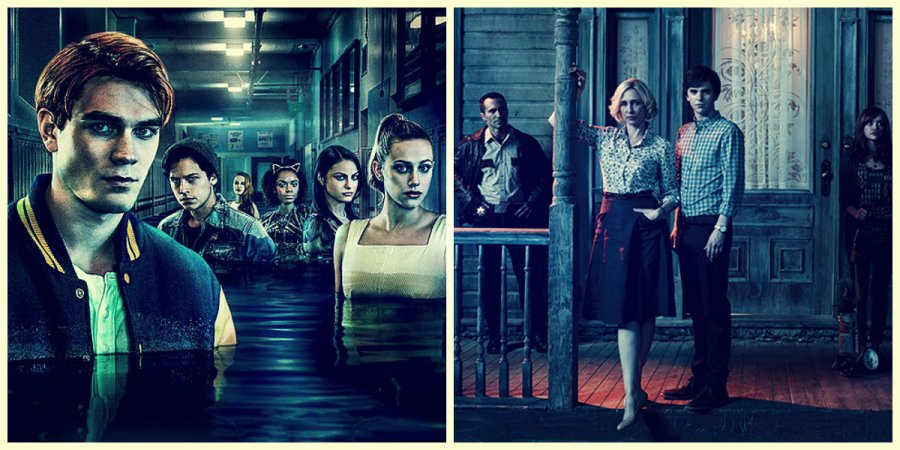 TV shows that draw on decades old source material are not exactly a new phenomenon, but there is certainly a new trend arising from it: the revitalization of classic, but problematic, material. The fact is, there is an overwhelming number of great stories out there that, by today’s standards, are burdened by their historical baggage — perhaps most notably in their politics of gender and sexuality. A good example is the cover of a 2011 Archie & Friends comic, in which Archie is asked how he tells apart his set of twin girlfriends, and with a big smile he replies: “I don’t even try!!”

As popular culture becomes increasingly progressive, looking back at some of our favorite classics requires a certain amount of whistling passed some pretty unfavorable images of patriarchal and heteronormative values. But we do it because, hey, they’re the classics! And we justify it with extensive contextualization, which is fine. But what’s braver, is questioning those images. And that’s exactly what we are seeing on TV these days with shows like Bates Motel (2013 – 2017) and #Riverdale (2017 – present). These shows are more than simple remakes, reboots, or re-imaginings, they are subversive re-contextualizations; and though they aren’t perfect, they’re rather brilliant.

Let’s take a look at why.

images credit to The CW and A&E

A couple months back I encountered the newly released trailer for Stranger Things, Season 2. Aside from the utter disappointment that came with the realization that the trailer was only a play on audience anticipation and gave no narrative information, I found myself disappointed in me. Why? Because despite ranting and raving about the brilliance of this show, I had to stop and think, ‘what happened last season?’. Blasphemy, I know. But this is the paradox of binge-watching.

For those of you who don’t know, Stranger Things is Netflix’s greatest success. Season 1 was an engaging mix of 80s nostalgia, sci-fi/horror hybridity, and beautiful character development.

Most people are quick to describe it as similar to the best horror movies of the 1980s; and although Stranger Things is a perfect example of this sentiment, the truth is that this is a period of time in which TV has become far more cinematic than it has ever been in the past. We are currently in a new age of storytelling that conflates the escapism of the cinema with the accessibility and interactivity of TV.

We are presently experiencing TV in a way we never have before. Some go as far as to call it the Golden Age of Television, referencing the sheer quantity of quality TV available. Traditionally, TV has been thought of as the cinema’s crass younger sibling; it was originally a space for variety shows and game shows, and eventually moved towards the sitcom. For a long time, TV shows were rigidly structured and predictable in a way that cinema was not. Of course, to be fair, the cinema had had decades to mature by the time the 1950s saw the birth of TV.

Though the introduction of TV (and later the VCR) initially worried the film industry, the fears eventually proved to be unfounded. Stats from the 1980s show that people actually attended cinemas in record numbers. There are different ways to interpret this, but what seems evident is that TV and movies do not cancel each other out. They offer different viewing experiences. Or, at least, they once did.

Back in 2000, historian and theorist Anne Friedberg wrote a critical essay aptly titled, “The End of Cinema: Multimedia and Technological Change.” This essay highlighted the ways in which spectatorship had been altered, first by the advent of the television, then by the advent of the VCR, and finally by the advent of digital media. Astoundingly, her arguments do not feel at all dated when we think of them alongside the advent of content streaming. Rather, it seems she was prophetically telling the origin story of Netflix.

Last week it was reported that Joss Whedon is being recruited to write and direct DC’s first-ever Batgirl movie, and the fan anticipation is already palpable. Whedon is better known for his long-standing relationship with Marvel Comics; he wrote a wildly successful volume of Astonishing X-Men (2004-2008) before writing and directing The Avengers in 2012. He then went on make Avengers: Age of Ultron, after which he stepped down from the MCU, displeased with the work.

This sorted history with Marvel makes his potential move to the DCEU all the more intriguing – but it won’t be his first rodeo. Whedon actually wrote issue #26 of DC’s Superman/Batman back in 2006. And yet, even with this mature comic book resume, it’s Buffy the Vampire Slayer – his very first TV series – that we should look to for evidence that Batgirl is full of promise. Without a doubt, penning Batgirl will give Whedon an opportunity to return to some of the most prominent themes of Buffy; you know, the stuff that made him a household name among fans and critics alike.

Continue Reading for themes to look out for in ‘Batgirl’ such as, the ups and downs of campus life, duality, technology, sexuality, and friendship.

Despite initially offering some problematic portrayals of women – Lori, Andrea, and Carol – The Walking Dead has really stepped up its game in the last few seasons. Lori and Andrea were killed off, so that takes care of that; and Carol transformed from abused housewife to tough-as-nails survivor. More women eventually got added to the main cast, and they keep getting stronger and more well-rounded.

Now, Maggie, Michonne, Rosita, Tara and Sasha make up some of the best female characters on TV today. But it took until Alexandria for us to get a female leader; and soon after, she died and Rick took over. Then we met Dawn, who was in charge at the hospital. She turned out to be two-parts villain, one-part weakling who couldn’t stand up against the wrongs she knew she and her group were committing. Even more recently, we met Jadis. There’s not much yet that can be definitively said about this group, except that they are strangely modelled after a 90s sci-fi flick. Unfortunately, it’s unclear at this point if Jadis is friend or foe.

Suffice it to say, the depiction of female leadership has been questionable. Nonetheless, this week’s episode, “Something They Need” shined a spotlight on two of the season’s most significant female leaders. Natania of Oceanside, and the rising leadership of Maggie, at Hilltop. Both make very interesting case studies for the authority of women in a post-apocalyptic world.

Adaptations of comic books are a dime a dozen these days, what with MCU superheroes dominating the film industry and DC television shows spreading like wild fire. However, as any comic book reader will tell you, the pages of graphic novels have so much more to offer than superpowers. Brian K. Vaughn’s, Y: The Last Man is a perfect example. This post-apocalyptic series features a dystopia in which a mysterious illness has entirely wiped out the Y chromosome, killing every male being in the world – except for two: Yorick, and his monkey sidekick, Ampersand. The award-winning series (praised by Greats including Robert Kirkman and Joss Whedon) ran for 60 issues, and is currently in the works for a television show – and it promises to be like nothing you’ve ever seen before. Let me explain.

With Buffy the Vampire Slayer currently celebrating its 20 year anniversary, it seems like the perfect time to reflect on some of the reasons why it is widely regarded as one of the best television shows of all time. After a really sad beginning as a failed movie, and then hitting the air as a low-budget, mid-season, replacement, it still went on to become an icon of popular culture. Not to mention, the colossal level of critical acclaim it has achieved. The series launched Joss Whedon (writer/creator) to stardom; and today, most people agree that he’s a genius, or a nerd-God of some sort. So, what is it about a teenage girl fighting vampires that could be so overwhelmingly successful? It’s simple. The show’s got wit, smarts, and heart. Perhaps most importantly, though, it has some of the most well-conceived characters in TV history.

Ever fascinated by deconstructing human nature, the writers of Buffy the Vampire Slayer (almost obsessively) developed and redeveloped characters so that they would grow and change overtime in a realistic way. Not only did this make for engaging storytelling, it ensured that each re-watch would be a more richer experience than the last. To break this down, let’s take a look at the theme of duality as it pertains to the way in which characters mirror each other, and the way in which doubles and dopplegangers draw attention to the complexity of identity.

This is just a quick update about what I’ve been up to, and some changes you will notice on Beyond the Threshold. As much as I love writing flash fiction, there is so much more within the realm of speculative fiction that I want to explore. As you may have guessed, I’ve always been a lover of books, comics, TV and movies. I spent 7 years in post-secondary education for film studies, so when it comes to discussing film and TV, I really can’t shut up. So I’m expanding Beyond the Threshold to leave room for things such as more book/comic reviews, and Top Lists for a variety of topics regarding TV and movies. I’m currently writing for a pop culture website, so a lot of this content will be linked to those published articles. And, of course, I will also continue to post my own fiction here too.

Thanks for all the support – I hope you’ll enjoy the expansion. Stay Strange!

It’s the final day, and a final thank you to Irene of Books and Hot Tea for tagging me on this one. It’s been more difficult than I had anticipated – finding those perfect words. But at least I’ve gotten to revisit some of my favourite books!

So, one last time, here are the rules:

To end, I’ve chosen an eerie quote from Angela Carter’s short story, “The Lady of the House of Love.” It’s been published in a collection of her works, The Bloody Chamber.

She herself is a haunted house. She does not possess herself; her ancestors sometimes come and peer out of the windows of her eyes and that is very frightening.

A sorrowful and grim passage that well represents the tone of Carter’s fairytale retellings. I recommend this collection to anyone who has outgrown fairytales as told by Disney, and is longing to return to their darker, more powerful, roots.

Day 2, and once again, a thank you to Irene at Books and Hot Tea for tagging me.

Here are the rules:

Today I bring you a thoughtful prose from Weaveworld by Clive Barker. The story is magical, and dark, and (at times) convoluted due to its dense use of language. It makes for an extraordinary read though, and you can pull quotes from it for days. So here’s mine:

Nothing is fixed. In and out the shuttle goes, fact and fiction, mind and matter, woven into patterns that may have only this in common: that hidden amongst them is a filigree which will with time become a world.

As the first page of the story, this grandiose introduction invites the reader to fully immerse themselves into the world of storytelling, and to think about what it really means to life into characters. I recommend the book to all writers, and to anyone intrigued by words and how they come together to create meaning.

Today I nominate The Writer’s Inkwell; Nightmares, Daydreams and Imagined Conversations; and HemmingPlay. No pressure, but feel free to join the fun!